Anoxia – To the Lions (Mighty Music) 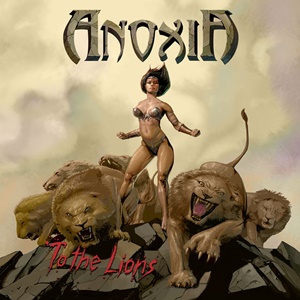 It’s been nine years since this Danish metal act Anoxia last released an album. To the Lions hopefully will quench expectations for their followers- or gain newcomers to the fold previously unaware of this band’s activities. Splitting their time between the road, the rehearsal room, and general work/family/life balance, their sound comes from a mix of old school heavy metal and thrash influences – as well as a willingness to occasionally inject some modern execution/groove to keep the proceedings a little more current.

What the listener can expect is an infusion of sounds that possess a lot of the power and melodic hooks that put Judas Priest/Iron Maiden on the map during the 70’s/80’s, as well as a bit of the twin harmony / forceful gang choruses that made Metallica/ Megadeth in their early years equally engaging and energetic. Vocally guitarist Lars Frederiksen tends to favor a mid-range clean range, occasionally though he chooses to belt out the perfect scream or semi-growl just to keep things dynamic and varied. The axe work between second guitarist Claus S. Nielsen and himself produces very memorable riffs and runs – check out the pulsating energy throughout “Scaffold” (occasional tremolo picking and a half-time groove transition adding that extreme/modern twist ) or their measured, clean passages that open “Slavery” to understand these gentlemen have a multifaceted outlook on their performances. Anoxia make sure the hooks are strong on both the music and vocal fronts – steady rhythms and supplementary metal tempos give the title track and “Bite the Darkness” fist waving, hair flailing approval right away on initial exposure, growing stronger with subsequent playbacks. Because of their penchant for specific drum rolls and thick rhythm tendencies that are a bit more musically adventurous than most, Anoxia will get tagged for being more ‘old school’ in philosophy and execution – probably relegating the group to more of the over 35 crowd versus the youngsters.

To the Lions fits right into that 1984-86 wheelhouse when their influences were stretching a bit from being pure ‘thrash’ bands, and continually incorporating traditional aspects to widen their sound. Probably a record that will gain a small uptick from those who dig solid meat and potatoes, down to earth metal.