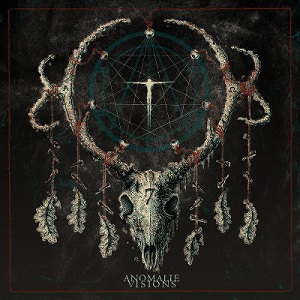 Released at the tail-end of 2015, Anomalie’s Refugium was a masterful display of melody-happy post-black metal. (Frankly, calling the band “post-black metal” may be a disservice.) Main dude Marrok compiled a hefty, instantly memorable batch of tunes, most notably “Between Reality and the World Beyond” that lent credence to the idea they were one of the underground’s next real breakout bands. Of course, that puts the pressure on the band/Marrok for a worthy follow-up, which comes in the form of Visions. It may be time to slow our roll a bit on Anomalie.

Never ones to shy away from epic/climatic numbers, Anomalie start Visions off in suitable fashion with “Towards the Sun,” a cut that highlights Marrok’s deft use of poignant melodies and subtle acoustic guitars. “The Wanderer” hits on the band’s would-be black metal angle, utilizing a bevy of blasts before segueing into a spiraling guitar segment. But that’s where Visions tops off, unfortunately.

The split acoustic/post-black metal barrage found on “A Monument” doesn’t do much in the dynamics department, sounding like a throwaway Alter of Plagues jam. The chunked-up, alt-thrash moves of “Starless Nights” find Anomalie at their heaviness, but it fails to resonate. A respite comes in the form of “White Forest,” which works because of Marrok’s shadowy acoustic guitar work; “One with the Soil” (the album’s closing jaunt) fails to move the needle, sort of an Anomalie composite track.

Whether it was the weight of expectations or the lack of time in between Refugium and Visions, Anomalie have taken a slight step back here. Visions isn’t a total letdown, but given how good Refugium was, you can’t help but ponder how different this one could have fared with a different, more daring approach. Visions plays it too safe, and Anomalie eats one because of it.