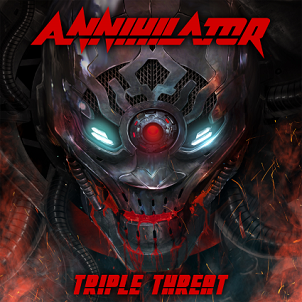 One disc of Annihilator’s Triple Threat is an album with acoustic renditions of the band’s classic songs. Ponder if Exodus or Testament could do something similar. (Maybe Testament.) The novelty of playing his band’s songs acoustically wasn’t lost on Jeff Waters, who calls Triple Threat “One of the coolest things” he’s ever done in his career. Beyond the acoustic set, there’s a live set culled from Germany’s Bang Your Head festival, and a third disc with the visuals from the acoustic set, Bang Your Head, and a mini-documentary directed by Waters.

Recorded in one take, the acoustic set is goofy (per Annihilator’s usual standards) and lively. However, hearing the band’s songs stripped to the core is rather catchy, especially on cuts like “Bad Child” and “Snake in the Grass,” neither of which are going to win awards for their lyrical exploits. Waters, who has assumed all vocal duties, is probably a better singer than he gives himself credit for, most notably on “Holding On,” pulled from 2004’s underrated All for You. The proverbial “Stonewall” emerges as the best jam of the bunch and rightfully so–it’s one Waters’s all-time masterpieces. (Note: Waters’s in-between song banter is priceless.)

As per the usual, the live set at Bang Your Head is give-and-take. The band Waters has behind him is as formidable as any he’s assembled, giving the staccato “Set the World on Fire,” ripping “Never, Neverland,” and enduring “Alison Hell” ample power. (The visual portion of Triple Threat was not provided for review.)

Triple Threat is worth a look if only for the acoustic set, a towering challenge that Waters and gang pull off with ease. There’s little left for Annihilator to prove in their three-decade-plus career, but consider Triple Threat the ultimate curveball from a legendary thrash band.