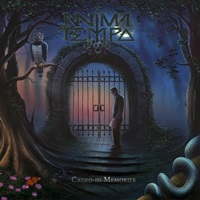 Developing a progressive metal sound that is modern and experimental, Anima Tempo attain rarified stylistic differentiation on their debut album Caged in Memories. This Mexican quintet started in 2009, slowly improving through a series of demo/EP releases to work their way up to a proper full-length. There’s a hypnotic sense to a lot of the tempo shifts and riff segments – often switching moods up at the drop of a hat from tranquility to jackhammer cyber-fused heaviness, which along with the dual clean/extreme vocal employment gives Anima Tempo many colors and shades of arrangement exploration.

Three guitarists allow the band to tackle counterpoint elements while still giving an abundance of harmonic and melodic moments, occasionally shredding even in the keyboard department for “Art of Deception”. Periphery and TesseracT come into the picture as Djent-like stop/starts are a focal point in many tracks, yet there’s also a bit of natural musicianship and dynamic contrast to the more streamlined “Scarlet Angel” that puts a bit of a Dream Theater or Textures stamp on the proceedings. You’ll find yourself humming along to many riffs or melody lines, and that’s a good thing in a genre that can sometimes be too technically sharp while forgetting to create a retainable, memorable song.

Although the blueish, gated cover has more of a King Diamond effect than something in the progressive category, overall Caged in Memories contains 8 tracks and 53 minutes of stimulating song craft – sure to appease a lot of the younger crowd into this forward thinking model plus not totally alienating the Dream Theater crowd. Anima Tempo will gain converts, feeding social media buzz and aligning community attraction by the day.