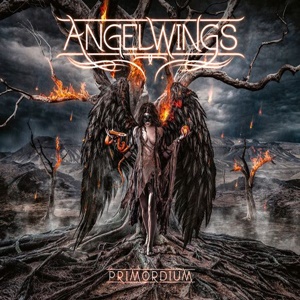 While many symphonic metal artists probably used Nightwish as a benchmark template to start their career – Angelwings evolved from covering the band in 2013 to writing their own material a year later. Shuffling around three musicians in the interim between 2017’s The Edge of Innocence debut and the follow-up Primordium, what also sets this act apart from others is location – hailing from Gibraltar (a British overseas territory on Spain’s southern Mediterranean coast). Given this scribe’s first exposure to the quintet, one can expect a broad soundscape of symphonic metal, encompassing a variety of shorter to epic arrangements plus numerous outside influences and factors that set these musicians up for a distinctive take on the genre.

Another concept album leaning off the debut where a lost soul of divine blood fights for freedom with the Gods aiding the cause, there are numerous sounds and branches to take in song to song – narrative accents, orchestral/symphonic underpinnings, vocals from operatic to melodic/extreme in nature, as well as the optimal metal terrain through the heavy instrumentation which at times can be quite progressive. Risk-taking measures on specific guitar parts to “Fallen Angel Song” prove Carlos Alvarez-Nava and David Duran Ramirez aren’t content to lay in the aural shadows – adding in textures of Evergrey and Dream Theater to the bombastic, cinematic landscape. The title track has a calmness about its opening acoustic guitars and softer keyboard/vocal melodies before the driving nature takes over – Davinia Cano using a bit of her semi-operatic charm and cultural inflections to pour passion into the verses and chorus while the running streams offer a midway dynamic reprieve before the heaviness kicks in for the final measure. The vivid organ, keyboard, and orchestration strokes from Glenn Cano come from a Nightwish, Xandria, and Kamelot canvas – his best work appearing during the majestic “Prayer” as well as the almost eleven-minute twisting opener “Genesis” (the latter featuring Power Theory guitarist Carlos Alvarez on vocals plus wind instrument professional Jeroen Goosens). You’ll get ten songs in an hour-long odyssey – an acceptable outing considering the scope of lyrical content and musical ideas to pour through – as long as the listener is willing to put in that time to absorb, reflect, and plug into the broad musical output.

If many miss Nightwish circa latter Tarja-years put through a bit of a heavier/progressive metal microscope, Angelwings could be that ideal sweet spot to add to your collection.