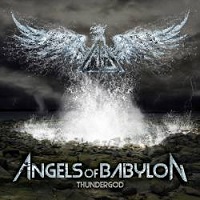 No one will ever out-cheese Manowar in the chest-bumping, loin-cloth wearing, quasi homoerotic arena…that’s pretty much a given. It’s in the bands that have spawned from Manowar is where the line needs to be drawn, and while Ross the Boss’s solo career has crawled to a still, the Kenny “Rhino” Earl-led Angels of Babylon have faired slightly better. Their 2010 Kingdom of Evil featured bass work from Megadeth’s David Ellefson, giving it some validity, and even though there’s no high-profile guest action on Thundergod, it keeps the cheese at minimal levels.

Essentially a European-sounding power metal band from America, Angels of Babylon use every trick in the melodic metal book to make their case. The standard double-bass blazing opener is found on “Thundergod” (a tribute to fallen Manowar drummer Scott Columbus), while the hands-to-the-sky anthem hits via “Sondrio” and “What You Have Become,” a number that revels in song-oriented arenas. Earl handles all vocals, and he’s somewhere between Klaus Meine’s more wussy moments, and the AOR-tinged Apollo Papathanasio (Firewind) and Roberto Dimitri Liapakis (Mystic Prophecy). Nevertheless, he has some serious stumbles on the lame-o balladry of “Turn to Stone,” proving the old adage that power ballads should be left in the 80’s.

Not nearly the walking cliché it could have become, Thundergod very carefully treads the line between balls-to-wall European chicanery and the ready-for-consumption strands of conventional melodic metal. Europeans tend to gobble up bands like Angels of Babylon without a second thought; perhaps us Yanks are too hardened to get excited about a band like this.