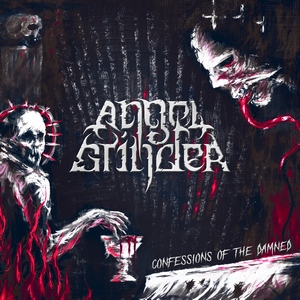 With old school death metal being all the rage within the last few years, many have come to make it feel almost synonymous with old school Swedish death metal. However, more bands are growing hip to the notion that it’s okay to play an older style of death metal without sounding like an Entombed/Dismember wannabe. You can add Angel Grinder to that growing list of standout acts based on the impression that Confessions of the Damned leaves.

There’s no need for fancy labels or listing out different subgenres, Angel Grinder just serve up death metal, plain and simple. Sure, you can mention that there are some thrash influences (much akin to fellow New Englanders Scaphism, of which they share a vocalist in Eden Rayz) or some slight blackened vibes, but through and through Confessions of the Damned is all about being an aggressive death metal attack. Instead of trying to emulate their favorites or attempting to out-tech the competition, genuine and passionate songwriting reigns supreme here, and there’s a real feeling of ‘song-oriented’ material. There’s no overabundance of blast beats to riddle away at your patience either, and the riffs have plenty of breathing room.

There’s enough brutality to satiate the urge, but the melodies here are just as important (without going into a melodeath direction). One of the highlights is that of “731,” where some galloping thrashy riffs and mid-tempo stomping maintains a catchy flavor, and the track rounds out with a solo that hits all the right marks without overdoing it. The mood-setting pieces of “Overture” and “Exile” actually work as they help to keep that vibe going, while giving the listener a slight change of pace. Speaking of vibes, they do a good job of capturing that evil feeling that death metal sometimes struggles to maintain in the present day. A track like “Spine by Spine” showcases this with it’s burly tone, even when the track accelerates, and Eden Rayz’s vocals hit the right combination of growls and light screams and sit upfront in the mix to give them that menacing presence.