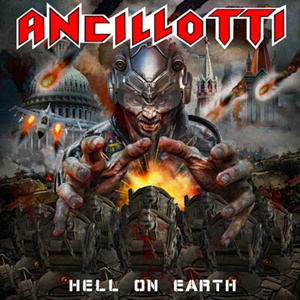 Ancillotti is an Italian heavy metal act that is truly a family affair – considering 75% of the lineup is brother, brother and son with guitarist Luciano Toscani the lone solider not named Ancillotti. The lineup has been the same since 2009 – as Hell on Earth is the third album and first in four years for the quartet. They’ve had touring opportunities across mainland Europe with Ross the Boss, Tygers of Pan Tang, plus gigs with Gamma Ray and Primal Fear among others – setting the stage for a key moment in their discography where they hopefully can advance up the ladder in terms of a following and stature in the scene.

Musically the band intertwine the heavier, lean focus of traditional metal acts from the German scene like Grave Digger and Primal Fear against early staples like Accept and Judas Priest to keep a steady mix of anthems and slightly speedier affairs that delight headbangers and supply energy to festival masses. When it comes to Daniele ‘Bud’ Ancillotti at the microphone, he has a dual sinister clean meets gritty snarl to his vocal work, making me think of Ian Gillan meets Mat Sinner throughout “Fighting Man” and bluesy highway-cruising “Another World”. The axe mechanics of Luciano along with the steady, fluid drumming of Brian Ancillotti keep the hooks and transitions tight and catchy – assuring “Revolution” and “Blessed by Fire” will get plenty of rapturous applause, chanting, and fist waving approval. Additional mountain top narrative elements signal the start of the speedier “Firewind”, possibly one of the strongest riff/double kick arrangements of the record – but also reveals a bit of the limitations for Daniele vocally, as he doesn’t really stretch into any Halford-esque piercing screams, keeping things mid-range with supplementary gang-oriented harmonies when needing that extra impact. And the accented narrative start to “Frankenstein” could illicit a chuckle or two, though probably unintentional – otherwise another solid Primal Fear-like power affair that bristles with strong guitar play and proper rhythm section propulsion.

Plenty of metalheads will dig the way Ancillotti go for the gusto and fly the flag high for melodic heavy metal from a UK/German influence map. Hell on Earth could get the gentlemen into some solid Keep It True/ Headbangers Open Air type festival slots – and more touring with some of their heroes as well.