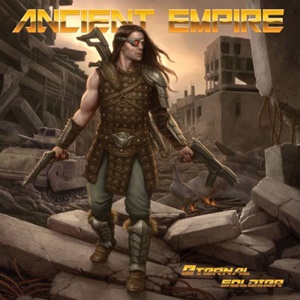 Releasing three albums over the past four years, Northern California band Ancient Empire only took a scant eight months between records for album four Eternal Soldier. Probably a case of striking while the iron is hot in terms of creative output, these eight songs continue firing out US traditional metal riffs with power, progressive, and epic nuances that bring many classic outfits to mind. Mainman Joe Liszt juggles most of the guitar and bass duties beyond the vocals, enlisting drummer Steve Pelletier and lyricist Rich Pelletier plus a couple of guests to flesh out the workload – as a result serving up a potent and peppy platter that embodies classic principles into sterling material.

Joe careful lays down proper layers of guitars while propelling bass lines (along with guest bassist Dan Lynch) that rival the best in the business (Geddy Lee, Steve Harris) – you’ll feel the galloping nature to a standout such as “For the One I Lost”, the instrumental time signature shift after the first chorus reminiscent of early Queensrÿche, while being more commercially straightforward in a Priest/Painkiller fashion for “I, Alone”. The drumming supports all the riffing and harmony action without overplaying – Steve throwing in entertaining quick fills while alternating double kick/snare patterns for the opening title cut, yet also knowing when to be progressive-minded for the tricky verse hits during “Shadow from the Past”. The acoustic supplementation against thoughtful twin electric harmonies for “Upon This Withered Earth” sets the stage for more driving riffs – the type that get crowds chanting, transforming from an Iced Earth start into another solid traditional/power number. The grittier vocal style while still clear has more of a Hansi/Peavy edge versus a Halford/Dickinson style crooner, and gives Ancient Empire that distinction marker many will appreciate.

The cover art gives off this futuristic element against the rubble and may be a tad cliché but fits the musical themes and lyrics present. Eternal Soldier contains the stirring guitar harmonies, bold choruses, and marching atmosphere necessary to galvanize any metal trooper fighting for glory. Ancient Empire reaffirms my belief that the creative well has not run dry for this genre.