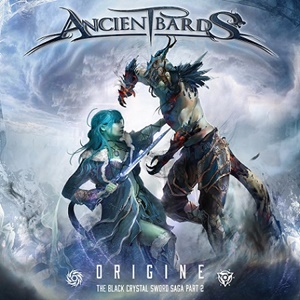 Certain constants are necessary for the best aspects of symphonic power metal to not only entertain but thrive. The narrative themes must have the proper cinematic/theatrical authenticity – the choirs and orchestration bombastic and larger than life – beyond the fantasy/magical storyline which often carries conceptual context rolling out over the course of the album’s timeframe. Italian act Ancient Bards since their 2006 beginnings have done their best to stay that course – this fourth full-length Origine the second installment of The Black Crystal Sword Saga that first appeared in 2010 as their debut effort. Gaining second guitarist Simone Bertozzi last year to replace Fabio Balducci, the sextet lives and breathes symphonic power metal in a blend of Rhapsody-like sophistication and early Dark Moor bliss – tackling the tough balancing act between ‘metal’ and the over-the-top classical/orchestration maneuvers that keep fans of this genre yearning for more.

The best bands of this genre know when to go full throttle in terms of speed and layering, and then lay back into something more mid-tempo and commercially viable. On the front half of the record, you clearly get both aspects for “Impious Dystopia” and “Aureum Legacy” – the latter containing some breathtaking melodies from Sara Squadrani that rise up and down with pop and metal sensibilities. Keyboardist Daniele Mazza lays down a wonderful ivory foundation and builds out orchestration that aligns with the mood of each specific arrangement – check out “Light” for his inner emotional reach during this ballad. The Rhapsody-ish choirs, racing double bass, and speedier riffing makes “Titanism” a second half favorite – you can imagine this song being one of many brought to life best with 50-60 individuals on stage galvanizing the battle and charging up the audience troops. Ending the record on the close to 15-minute “The Great Divide”, it’s an epic offering delivered in three parts: “Farewell Father”, “Teardrop”, and “Il grande e forte im pero”. Ancient Bards throw all the proverbial nooks and crannies into this effort – an instrumental buildup, a calmer verse start, the serene midstream that conveys operatic dreams, the evil male growls from Simone against an extreme riffing/blast beat switch-up in contrast and the heroic ending with uplifting lead break action before the narrator and choir sign off.

Ten tracks in just under an hour – Origine succeeds in starting 2019 off well for what most ardent symphonic power metal followers desire. To transport themselves to another realm of Nordic and Japanese-oriented subject matter and feel like the songwriting can take the listener easily to that other territory beyond the norm. Hopefully this will succeed enough to maybe get this band to North American shores, even if it’s on a one-off festival basis. 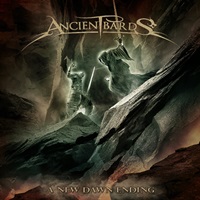