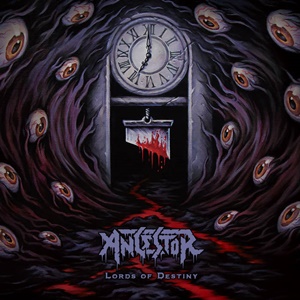 Proving the global scale of metal, Ancestor come from mainland China and deliver old school Teutonic-styled thrash for their first full-length Lords of Destiny. Not knowing much about their background, they’ve released a previous EP Age of Overload in 2017 – after a decade of lineup shuffles and natural instability. Taking their material at face value, there’s no question that the quartet live for a movement at its most intense and pure time period – before commercial aspirations for some musicians set in, without sacrificing integrity. Reverting to speedier terrain, crunchy mid-tempo transitions, and spitfire venomous vocals, Ancestor believe in bands like Sodom and Kreator in their demo stages through first/second full-length eras – stirring up that maniacal nature of youth in the thrash scene.

While much of these songs get in and get out through blitzkrieg stop/start musical action and forceful, simplified shout-oriented choruses, the foursome do delve into a more controlled arrangement now and again as “The Final Worship” shows a slightly more balanced march and traditional gallop, infusing a bit of Megadeth-like charge before the Teutonic buzzsaw kicks in two-thirds of the way through as the progressive bass bouncing in and out of the fray. Meng Li and Fuwen Lang feel at home peeling off blackened licks for “Black Future” as they do punk-infused riffs during “Savage Action” – although the lead breaks from time to time can get a bit too off the map, going for more of the shock and awe factor. The rhythm section navigates the transitions and tempo shifts as well as to be expected- and Meng as a vocalist has that early Tom ‘Angelripper’ raspy aspect to his roar that should cultivate plenty of kudos.

It should be interesting to see how Ancestor progresses over the course of the next album. Many of these bands stick to a specific influence/era of their favorite genre, and as a result never really move beyond cult status. For now, Lords of Destiny is a reminder of how 1984-1986 Teutonic thrash made a global impact as the second huge wave of bands surged across the underground.