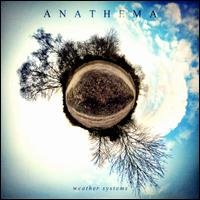 It’s rather neat to see Anathema volley from their formative years onFalling Deeper (which featured orchestral re-recordings of their early albums) to something like Weather Systems, an album that totally embodies “touchy-feely” Anathema. Those pining for a return of the band’s doom strokes of yore are going to be sorely disappointed and frankly, if Anathema weren’t called Anathema, we probably wouldn’t touch this album for this site. But we have a soft spot for the Brits, so let’s have at it, shall we?

Because there’s a dearth of electric guitar, the Cavanaugh brothers (Vincent and Danny) allow for their superlative acoustic guitar skills to shine, especially on opener “Untouchable Part I.” Guided by a glossy and sunny guitar line (finger-picking is in the house), “Untouchable Part I” has all of the emotional, part-sappy, part-earnest feel that has come to embody post-JudgmentAnathema. The song’s successor (“Untouchable Part II”) is another charmer, led by Vincent Cavanaugh’s tender vocals and somber pianos. It’s a total break-up or make-up song.

“The Gathering of the Clouds” follows suit, emerging as perhaps the most dreary song of the lot alongside “The Lost Child.” The band’s Pink Floyd influence is still quite present, heard in those lush arrangements (see: “Sunlight”) that on occasion, fall short of the mark (“The Storm Before the Calm”). The band still has a way of getting a little too ambitious for their own good, so rather than letting the proper stream of emotions and melody flow, they take some steps backward, like on the rather dull and drab album closer “Internal Landscapes.”

Not quite as lopsided as its 2010 predecessor We’re Here Because We’re Here(which had only two worthy songs on it: “Thin Air” and “Summernight Horizon”), Weather Systems doesn’t put the final nail in Anathema’s metal coffin, only because the band did so around 2001. What it does do, is show how a band can successfully remake themselves into a post-rock force with a surviving metal fanbase to boot. There really is no other band like Anathema.