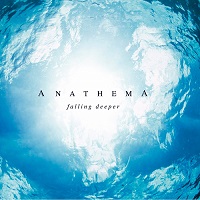 Big-time backers of Anathema we are, regardless of how little they want to do with metal. Falling Deeper is further indicative of that notion, being that the album features re-interpretations of the band’s classic Goth metal era (1991 – 1995), done in an orchestral and acoustic manner. It’s not unlike what My Dying Bride just did with Evinta, although Anathema seems to work in opposite fashion of MDB – Falling Deeper is brilliantly minimal.

Following in the footsteps of 2008’s magnificent Hindsight (which saw the band re-work its albums from 1996’s Eternity onward), Falling Deeper shows how well Anathema operates when using the barest of elements. Because the bulk of the band’s early material was oftentimes long, the decision to cut these songs

down to the core works wonders. Therefore, there’s nothing but the juicy core of early masterworks like “Sleep In Sanity” (the band’s best Darren White-era song), “Crestfallen,” “They Die,” and “We, the Gods.”

When stacked up against the original (which we did because we’re nerdy for Anathema), a lot of these songs hit just as hard, like the swooning “Sleep In Sanity,” which retains the key melodic line. The haunting “Kingdom” sounds just as foreboding as the original, with only the massive build-up heard on the original repressed, while the inclusion of ex-The Gathering siren Anneke van Giersbergen on “Everwake” provides a threadbare, but emotive moment.

The album centerpiece is “We, the Gods,” originally found on the Pentecost IIIEP. Once a sprawling, weeping melodic gem (the dual guitar

melodies on the original are spectacular) is now a delicate piece worthy of soundtrack inclusion. It’s easily the most striking bit on Falling Deeper, with a crescendo at the song’s conclusion that is simply breathtaking.

Forever tied to the metal scene because of their seminal early works, Anathema’s flexibility with the first several albums is quite evident on Falling Deeper. Those who severely impacted by albums like Serenades and thePentecost III EP will have no problem finding solace with this. And those who are new to Anathema will more than likely be stunned that a band can sound so different over 20 years, yet still be as captivating.