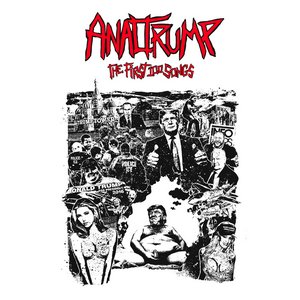 100 songs for most bands would be a box set, yet the Anal Cunt-inspired parody ensures that all 100 tracks end up taking up a little more than 11-minutes total. That’s right, it’s a fired-up blast-fueled adventure of songs that tend to rip towards the longer end of ten seconds (if they make it that long). To that end, they are what they are: explosive bursts of a wild riff and crazed drumming with extreme vocals that are surprisingly fresh for their output duration (it doesn’t take much effort to hear who is behind the mic based on this factor). It’s brutal, it’s angry, and it’s certainly not for those used to the A.C. styled delivery. In upping the ante from their inspiration, some of the song titles and concepts are pulled directly from quotes from the president himself (“Trump Tower Has The Best Taco Bowl”), mixed in with some A.C. type juvenile attacks (“Renewable Resources Are Gay”) which tend to blur the line between humorous and offensive and tend to use some actual sound bites to further enhance the mood and tone.