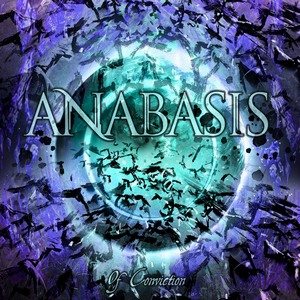 It’s a great feeling nowadays when you can dig out an independent release and they can stand neck and neck with the larger bands of a particular genre. Anabasis may be some young upstarts from Syracuse, NY, but you’d never guess it by your initial listen to their full-length debut, Of Conviction. Prog fans are going to have a field day with this one.

Justly melding progressive metal in both the ‘traditional’ and more modern angles, Of Conviction exudes variety and experimentation. It’s not a smorgasbord of random, thrown-together riffs, but an album that you can tell has a lot of feeling and emotions locked inside of it. “Human Supremacy Illusion” has a slow-building, classical vibe to it that feels fresh and original – you can tell it’s going to explode at any moment (which it eventually does), but it takes its time without over doing it. Something the rest of the release seems to grasp as well. With six tracks, and half of which hitting around the 8-minute mark each, there’s some nuance to how they manage to fill the time. Dream Theater-esque synths float around the often intricate yet emotionally-rich riffs and melodies, and there’s a nice switch up between proggy sections and some heavier, more brutal moments – such as the gentle and aptly named “Rainy Season” into the more snappy title track. There is a lot to take in (tis prog after all), but with repeated listens, more of the atmosphere and underlying tones begin to shine (closing track “Deeper” is a glorious example here).

Listening to Of Conviction is the equivalent of hearing something potentially big before the masses have had a chance to sink their teeth into it. There’s much to enjoy and savor from a musical standpoint, but it never goes overboard to where the average fan can’t get just as much out of it. It’s a narrow prog feat that not every band can understand, yet on merely their debut, Anabasis has captured it. An excellent starting point.