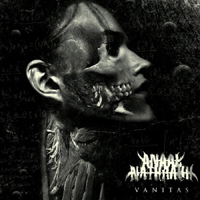 It takes only the initial minute of “The Blood-Dimmed Tide” and its furious motion to be left slack-jawed, fully aware that chaos-as-sound merchants Anaal Nathrakh have returned and are taking zero prisoners. Never ones for subtlety, across Vanitas there exists only sparse few moments of respite spread amongst an otherwise perpetual onslaught of the senses. The band returns here in grand fashion after last year’s somewhat underwhelming Passion. Cacophonous and light-speed paced and topped with the absurd vocal histrionics of V.I.T.R.I.O.L., Vanitas picks up the path started by In the Constellation of the Black Widow and pushes it forward in satisfying new ways.

You need look no further than “Todos Sodos Humanos” to see the band pushing the anti-melodic face of the band and fusing it with the ever-recessive industrial tendencies so prevalent in years past, the song coming to conclusion in much the same way as a world tearing itself apart. Initial single “Forging Toward the Sunset” features the most tangible connection with Constellation…, harrowing brutality meshed together with and contrasting the positively soaring clean vocals that constitute the closest thing the band has to choruses. “In Coela Quies, Tout Finis Ici Bas” sees the old melodic tricks employed in new and unorthodox ways, its searing guitar oppressive throughout and ending in an outlandishly fantastic solo. As usual the production on the album is particularly claustrophobic, no one aspect of the sound dominating all the others, everything a whirlwind of blades and shattered flesh.

“Of Fire, And Fucking Pigs” hails as one of the more beautifully honed exhibitions in focus, its taut features eschewing all fat and grinding itself into oblivion in barely three minutes. Where it exemplifies focus, however, others see the band expanding in surprising ways, “Feeding the Beast” arguably the most complete marriage of chaos and melody the band has ever forged and album closer “A Metaphor for the Dead” an enduring send off, colossal and unapologetic.

At only 38 minutes and a few breaths away from being missed completely if attention isn’t paid, the ten songs that make up Vanitas are each monuments. Monuments to the end times and each gospels unto themselves engraved with the rapacious black-grind sound the band essentially has a monopoly on. Never for the faint of heart or the easily distracted, Vanitas is another testament in the now thick Anaal Nathrakh catalogue that will leave you with more than a few ‘holy shit!’ moments.