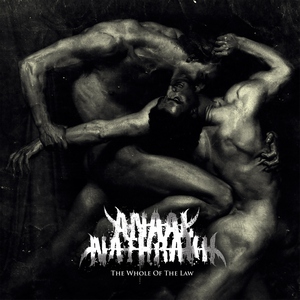 There’s no other band quite like Anaal Nathrakh. Despite the overly caustic atmosphere and deranged sense of majesty, it’s quite easy to pick out a song that the band has done. Mostly because no one quite goes as far into musical Armageddon as they do. The swirling and growing chaos they produce is hard to match, as is the melodic meshwork it fuses into. The same thing can be said of their latest album, The Whole of the Law.

When you continue to push the boundaries of the extreme, eventually you hit a wall. As cliché as it seems to say, Anaal Nathrakh continue to hit so hard that it keeps knocking the wall back. While the core of their sound has been much in check over the past few albums, they continue to surprise with the extent of the extremity that they can push, as well as the melodies that keep the whole thing from becoming an exercise in noise. As with previous album Desideratum, there’s a push towards more industrial effects, which are at their strongest and most disturbing – “In Flagrante Delicto” and “We Will Fucking Kill You” show how these elements merge with frantic riffing to make the songs feel larger than life.

One the other hand, “Extravaganza!” is one of the more eerie tracks the band has created in recent years, with vocalist V.I.T.R.I.O.L. even going so far as to reach into some King Diamond-esque falsettos. “On Being a Slave” has one of the best build-ups of the album, with ominous riffing and effects bursting into explosive speed and chaos – the band’s specialty. Then there’s the epic and triumphant melodies that never seem to halt the pandemonium, but somehow add to it – “Of Horror, and the Black Shawls” distorting this into creepy glee, and “Hold Your Children Close and Pray for Oblivion” providing a shocking level of catchiness despite its ferocity. Perhaps one of the strongest moments is “…So We Can Die Happy,” which provides the usual feral aggression, but then drops one of the most beautiful melodies after the track’s midpoint, which may even take some aback with its serenity amongst chaos.

Somehow always able to one-up themselves in both brutality and melody, The Whole of the Law is strengthened by their fusion. They can drip melodies with searing venom and produce some of the most caustic riffs and vocals you can find in metal, yet they draw you back in for repeated listens and actually get to the listener to think about the swirling madness within the music. That’s true craftsmanship if there is any.