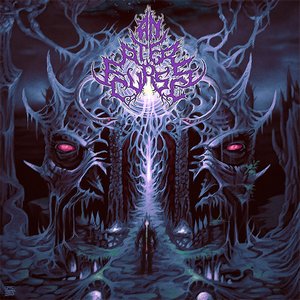 Astute readers may have noticed that An Eater’s Curse have been recently featured in a Sifting through Bandcamp column, for the single “An Eater’s Curse.” Well, as mentioned then, the song was a precursor to an EP, which has now been released on their Bandcamp site. Those keen to melodic death metal would be wise to lean their ears in and check this one out.

Notable for vocalist Jesse Santos (Shattered Sun/Fall), An Eater’s Curse pleasantly blur the lines between newer melodic death metal acts and those still in tune with the Gothenburg frequencies. The riffing is frequently aggressive, full of melodic leads and harmonies, and won’t be one of those melodic death metal acts that are mistaken for ‘core anytime soon. At times very much in step with the thrashier side of the older scene (In Thy Dreams, Detonation, and Cypher System come to mind), “Sea of Trees” starts the EP with plenty of speed and throaty screams, and leads into a great uptempo but melodic solo. One might actually say that the band has a tendency to pull towards a more technical approach, but it never gets in the way of the songs flow or atmosphere and keeps them from feeling like a Gothenburg clone. “Legion” begins with a sullen, acoustic introduction before things move into more thrashy territory. Eventually some clean vocals cut through, adding to the feeling of the song without being clichéd just before one of the album’s strongest solos kicks in. Slower and more melodic tempos, adding a feeling of majesty quite suit “Rise of the Forgotten,” again balancing against the more aggressive tempos and rounding things out.

A strong opening for this Texas act, with plenty of appeal to the melodic death metal crowd. Always a treat to find real gems like these – a familiar sound but one that is executed with precision and energy. A band that could easily move up the ladder given the exposure.