An Autumn For Crippled Children – Everything (ATMF Records) 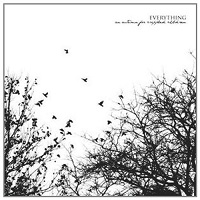 Yeah, we struggled with the name too, thinking it was some good-for-nothing deathcore band or just some good-for-nothing band in general, yet there’s some serious value to what An Autumn For Crippled Children are doing. Forget the sub-standard production values (which is why we scored this lower than it should be), Everything is a largely effective play on the post-black metal sound Alcest and Lantlos have nearly perfected, along with some choice 80’s new wave influences. Basically, it’s an atmospheric splendor for those who enjoy…atmospheric splendor.

The black metal influence is what gives Everything its foundation, operating in the same sphere as classic Burzum, meaning a riff is repeated a lot (but not too much), while the spare melody is dropped in to make things nice and tidy. Vocals aren’t much of a concern, as they’re buried in the back and have little, if any effect on the proceedings, so they’re allowed to be screechy and baseless, minus a few hushed Goth portions. Methinks some bands would be better served going the all-instrumental route if the vocals are such an afterthought.

Several moments stick out, including the jangly opening of “Formlessness,” a dead-ringer intro for Alcest if there ever was one. The forlorn and steep atmosphere of both “Absence of Contrast” and album highlight “Nothing/Everything” allow AAFCC to shade their music with more than just black metal overtones, while the oddly-titled “Her Dress As A Poem, Her Death As the Night” trudges along with a desperation well-suited to equip the burgeoning post black metal landscape.

Production issues aside (this thing seriously sounds like crap if you let it bother you), Everything is a joyride for the joyless, aiming right at the heart of the insufferable collective that sides with both Bauhaus and Burzum. Like we noted above, An Autumn For Crippled Children would have had their magnum opus on their hand if they decided to eschew the now oh-so unnecessary non-production, production tactics. It kills would-be great albums like Everything