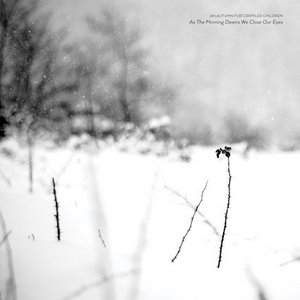 Ever the mysterious bunch, An Autumn for Crippled Children have been laying the shoe-gazey atmospheric black metal on thick for nine full-length releases at this point. Impressive in that they have been able to maintain said secrecy, as well as continue to generate a pretty consistent level to their material. The combination of dark beauty and fuzzy despair is more or less patented by the band at this point, and As the Morning Dawns We Close Our Eyes is as captivating as anything else in the band’s catalog.

Despite falling into that post-black metal shoegaze niche, what stands out with An Autumn for Crippled Children is how they are quite identifiable within the genre. There’s a certain sound and vibe that they generate, and even in a market that sometimes produces a lot of similar sounds, the mix of black metal, shoegaze, and doom (amid some other sprinklings) is very much their own. There is lots of beauty to be had in AAFCC’s depressive sound, and the elegance and majesty is very much a part of it. “Splendour Unnoticed” is a song that stands out here, with some faster tempos that dig into some blackened feelings that eventually start fleeting away (sans the vocals of course) as more downtrodden tempos emerge and gorgeous sounding melodies enter the mix. The appropriately titled “Melancholia” feels like the most striking track on that side of things, with some really jaw-dropping moments of melodies taking the centerstage and moving along at a pace that really makes the song sink in and deliver some powerful emotions. It’s some real spine-tingling stuff, and the sort of thing that AAFCC has always managed to do in their tenure.

Continuing to be one of the finest acts in their chosen field, As the Morning Dawns We Close Our Eyes is another poignant example of how An Autumn for Crippled Children gracefully handles the combination of majesty and gloom. Moving stuff, and we’d have it no other way from this band.