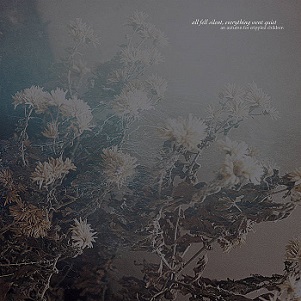 The best blackgaze band in recent memory produced their worst album in 2018 with The Light of September. The hazy-on-harsh-on-melody template that served An Autumn for Crippled Children so well on their previous six studio albums was rendered dull and uninspiring on The Light of September. The occasional mulligan is okay, provided a rebound is around the corner. On All Fell Silent, Everything Went Quiet (the band’s first on American indie Prosthetic after years on much smaller labels), the Dutch trio has wisely returned to the miserable and dramatic moors that made them so impactful in the first place.

The notion that An Autumn for Crippled Children is black metal slips further away with each passing record. Their utterly harsh and indecipherable vocals remain one of the few touchstones to the band’s early days, but their riffing has become a lot brighter and, dare we say, “uplifting.” There is now almost a post-romantic Goth hue to virtually all of AAFCC’s recent songs — you are almost more inclined to be spotted reading poetry aloud on the university lawn than taking on a nihilistic front, which, again, is a move away from black metal. Yet, the intoxicating flair of AAFCC’s riff and melody layering is not in dispute here. From the opening whirl of “I Became You,” the up-tempo synth burst of “Water’s Edge,” to the lush, dreamy scapes of “Everlasting,” “None More Pale” and “The Failing Senses,” there exist few bands as identifiable as AAFCC.

Curiosity now lurks as to how the metal scene at large will take to such a band of unique and polarizing qualities. This scribe guesses that AAFCC will continue to divide — this is not catch-all music, nor does it reside in a comfortable and tidy box to be picked apart by the BM ruling class. Rather, the persistent mystery and intrigue that has always surrounded AAFCC will only grow in stature thanks to All Fell Silent, Everything Went Quiet.