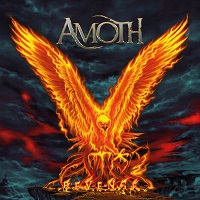 Having released two studio albums and a debut EP, each with a different lineup, since forming in 2006 in Helsinki, Finland, Amoth’s catalog doesn’t exactly scream consistency. With five years between studio offerings, the band has had plenty of time to craft its follow-up to 2011’s Crossing Over, but it sounds like Revenge could still use some work. Bassist Anne Latva-Somppi and guitarist Tomi Ihanamäki are the only two members that have remained with the band since its inception, guiding the progressive heavy metal quartet through new rotations of singers and drummers on each release. Although the band’s self-described sound is progressive heavy metal, additional elements find their way into the mix in the form of thrash, power, doom and even jazz. While it’s a mix that keeps the listener guessing as to what’s around the corner, it doesn’t always make for a cohesive final product.

The nine-song effort, which is split by a refreshing acoustic interlude, complete with moaning background winds, in the form of “For the Moon and Mercury” halfway through, is strongest in its beginning numbers. The record starts off with the hard-hitting, one-two punch of “Die Young” and “…And So They Fueled These Veins With Chaos,” the former a thrash-like powerhouse with plenty of melody while the latter allows Tomi to showcase his quick-finger fretboard prowess in the solo section. “Shadow of the Beast” features a haunting, swirling opening melody and biting guitars, with plenty of four-string groove bolstering the thick riffs, a trait prominently displayed throughout the album.

Despite the album’s standout track, “Road to Ruins,” being located on the second half of the record, it’s the weaker of the two sides. This is mainly due to the jazz-like ballad curveball served up by the band that is “Children of the Night.” Kudos to the band for trying to keep things varied, but it just feels out of place with its spoken word intro and jazz guitar chords. Unfortunately, things don’t get much better with the 7:34 closing title track, a frantic number with rumbling bass and an ever-changing tempo, featuring everything from screamed vocals and speedier melodic refrains to a slower, jazzier acoustic mid-section backed by clean singing that never really settles in.

Revenge has its moments. The aforementioned “Road to Ruins” stands out with its thick, fuzzy riffs, gang-shouted backing vocals, extended melodic solo runs, and sees vocalist Tomi Kurtti really going for the throat with his gritty, melodic delivery during the chorus. Tomi’s blue collar approach (with a bit of rasp) fits well with the raw, fuzz ‘n’ dirt production sound, lending an overall edginess to proceedings. And who can argue with the striking cover art of a phoenix engulfed in flame set against the backdrop of a dark, storm cloud-ridden sky?

Hopefully the revolving door of new band members has reached an end for Amoth. The band has shown it’s not afraid to shake things up in an effort to bring something fresh and exciting to the fore while carving out a unique musical identity. A consistent lineup and tighter focus on songwriting and organization will only serve to benefit these progressive heavy metal daredevils.