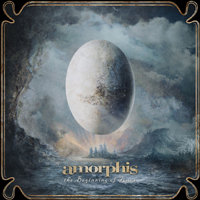 Evolution has been a constant in this Finnish melancholic rock/metal group. Morphing from their death metal beginnings, they would introduce native traditional poetry in their lyrics and folk elements long before it became acceptable or commercial. 1994’s Tales from the Thousand Lakes brought them acclaim as they proudly strove for a unique progressive, death and folk-influenced musical marriage.

Throughout the subsequent years, Amorphis may have softened their approach and yet they still deliver progressive, thought-provoking songs with diversity and atmosphere at the forefront. Album #10 The Beginning of Times appears to be a microcosm of their entire studio history, as these 12 songs run the gamut from death vocals with guitar-driven arrangements on through to more sparse, tranquil material with conventional alternative and clean singing parts. Over 54 minutes, the sextet manage to continually take the listener to highs and lows other melancholic rock acts can’t fathom.

The opening song “Battle For Light” initial sounds like something Sentenced would come up with, but then the ringing, death-like vocal roars and quick speed picking guitar action take the song into a more progressive, majestic and epic mood landscape. Other highlights include the furious low-tuned power chug mastery throughout “My Enemy” punctuated with Tomi Joutsen’s spot on clean chorus delivery, the supersonic lilting riffs and folk/electric harmonies during “Song of the Sage” (which features a killer instrumental solo section where with keyboard/ guitar hero glory) and the more mid-tempo march of “Escape” that easily contains future audience participation moments with its vocal dynamics.

To those who have never understood the grace and depth of Amorphis, The Beginning of Times would be the best opportunity to make erroneous ways correct. Their self-produced sound transcends a mere metal or progressive rock audience, and should inspire musicians to challenge themselves and non-musicians to further their creative embers.