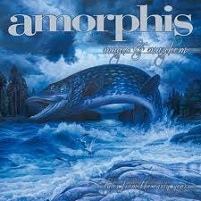 A stopgap release for the Finns, who are coming off yet another barnburner of an album in the form of Skyforger, Magic and Mayhem – Tales From the Early Years is a 13-song re-working of the band’s classic songs, plus a cover of The Doors’ “Light My Fire.” Obviously, the purpose here is to have current singer Tomi Joutsen sing on numbers from their first three albums, but this borders on pointless – you don’t tinker with the original magic heard on The Karelian Isthmus, Tales From the Thousand Lakes and Elegy.

The band has hit upon pretty much all of the worthy songs from their halcyon melodic death metal days, including the titanic “The Castaway,” majestic “Into Hiding” and simply breathtaking “My Kantele.” Nothing recorded here betters the original; Joutsen is clearly a superior singer than his predecessor Pasi Koskinen, but the production values on Elegy (of which Koskinen first appeared) were so advanced for its time (1996), that there’s no real point in re-recording these songs – there’s very little sonic variance.

Dipping back into The Karelian Isthmus days, “Vulgar Necrolatry,” “Exile of the Sons,” and “Sign From the North” make an appearance, demonstrating the brief time when Amorphis wasn’t interested in being melodic. Another qualm: “Of Rich and Poor,” and “Drowned Maid” are played slower than their original incarnation, thus, taking away from the throttling urgency these songs once displayed. Perhaps the only song that is improved upon is “Against Widows,” primarily because Joutsen has tremendous range and a much more feral bark than previous harsh vocalist Tomi Koivusaari.

Since Amorphis does have two veritable classic albums at their disposal (we’re referring to Tales… and Elegy), a release as this is necessitated, if only to bring this generation up to speed on one of the band’s that created Finnish melodic death metal. The influence and pull of Amorphis cannot be disputed – just reference any Finnish band playing melodic metal, and while Magic and Mayhem – Tales From the Early Years is far from mandatory, it does serve as a reminder of just how important Amorphis is.