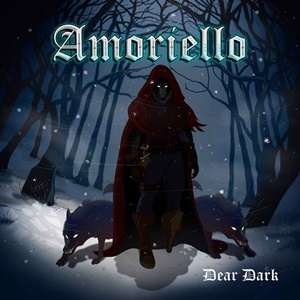 What you can expect from this material is four vocal-oriented tracks that possess a lot of dark power chords against some serious pipes in the lungs of Carlos Zema, which move songs like “This Burning Evil” and “Magic Wand” into the land of Dio and Black Sabbath as far as everything from slow, moving mysterious efforts with this epic, crawling feel to mid-tempo anthems, as well as an instrumental with “Thirty Four Strings of Fury” where the Shrapnel Records and Yngwie side comes to the forefront as the neoclassical licks and tricks fly in and out against a solid rhythm section backbone. Thomas seems to keep his songwriting lean and mean – no track exceeding four minutes and change, allowing the listener to absorb this material in a compact manner. There’s no shortage of talent on display – Carlos a true powerhouse singer with leather lungs and sinister grit plus an ability to hit the highest falsetto notes necessary (check out his work in the opening title track). Because it’s a situation where people record their parts remotely and then assemble things on the fly, there is a lower production value in certain spots where this scribe would have been hopeful for a more robust sound – but that’s probably a budget constraint issue more than anything else.

Amoriello has a throwback quality that would have been well-received in the late 80’s. Dear Dark as it stands is a quick hitting traditional heavy metal effort with those haunting keyboard and guitar trick movements that appease the mavens – making for a solid release.