Among the Torrent – The Grievous End of a Curse (Self-Released) 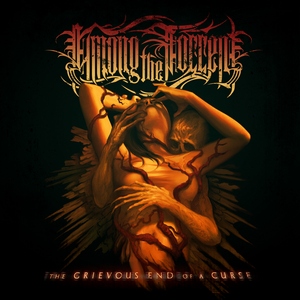 As it’s frequently alluded to, symphonic black/death metal is a style that’s tougher to land than one might expect. You need to capitalize on the more brutal side of the metallic spectrum and ensure that the band sounds metal, while bringing symphonic elements on board to give it a more epic and grand sound without it completely taking over your sound. Something seems to cause Among the Torrent little difficulty.

The band’s second release, The Grievous End of a Curse, hits all the marks you’d want an album of this style to hit with aplomb. There’s a bit of a modern feel to the band’s riffing at times, in addition to the black/death stuff, which may give them an ‘in’ with the core crowd without alienating them from the more purist-y types. The keyboards have a tendency to soar when needed (“Elude the Sun”), but they can be of just as much use in simply providing atmosphere for the more visceral moments when riffs reign supreme. Vocalist Chelsea Murphy handles the extreme vocals well, firing off lower roars and high screams with the best of them. But what makes the band stand out most is their use of melody. Simply put, there are some gorgeous melodies to be found on this album. “Transcending One” and “Beauty in Mystery” embrace a more melodeath approach here, and it suits the band to a tee without compromising any brutality. The melodies really allow the band to keep the listener engaged and work well interwoven with the keys.

Those looking for symphonic black/death with just the right portion of melody and aggression should look into Among the Torrent. The Grievous End of a Curse effectively blends synths and riffs into a package that allows the best of both worlds to shine.