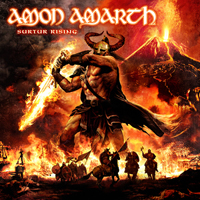 Take the 7/10 rating for what it’s worth – Amon Amarth are about as likely to deviate from the course as Charlie Sheen is to make a coherent statement (no more social commentary from us). No surprise here, as Surtur Rising is a virtual rehash of 2008’s Twilight of the Thunder God, and it’s getting to the point where it’s a miracle the band has any new ideas left. That being said, Amon Amarth does this better than anyone, prompting us to once again toss out the oft-used fact they are the Motorhead of melodic death/Viking metal.

Without a true “wow” track here ala “Free Will Sacrifice” or “Ruins To My Memory,” Surtur Rising does gain quick momentum thanks to opener “War of the Gods” and the subsequent surge of “Tock’s Taunt – Loke’s Treachery” are both standard-fare Amon Amarth. Speedy melodies, triumphant breaks, and Johan Hegg’s hearty bellows are the foundation for said numbers…well, actually ALL of the band’s songs. Nevertheless, they’re a pair of top-notch cuts.

Like Twilight of the Thunder God, Surtur Rising does drift off into a mid-album haze. This is more due to the over-familiarity with the band’s songwriting template than anything else, although “For Victory or Death” does kick out some icy melodies, and “Wrath of the Norseman” is perhaps the album’s best rocker. Album closer “Doom Over Dead Man” shows a rare orchestral side to AA, but unfurls as a rather disengaging and plodding number.

Now a veritable headline act on both sides of the pond, Amon Amarth are wisely sticking to their guns on Surtur Rising. In spite of how uniform the album is, such a move makes sense for the Swedes, for a drastic style change would certainly alienate the fanbase they’ve spent years trying to cultivate. Surely a lot of the newcomers to the fold don’t remember the titanic struggles during the early 00’s when The Crusher and Against the World nearly broke up the band. Things are so much easier now. Why not play it safe?