Amken – Theater of the Absurd (Self-Released) 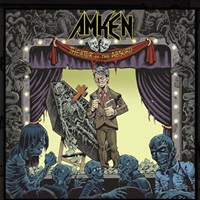 Deeper looks into a particular thrash scene such as Greece occur when one act gains bigger international promotional/tour access – thanks to the success of Suicidal Angels, more people are taking a gander at the talent pool, which brings us to the following quartet Amken. Founded in 2011 and hailing from Athens, this quartet released a debut Adrenaline Shot EP three years later, which EBM Records turned into a split album with Peru’s Maze of Terror the following year. Stepping up their game with Theater of the Absurd, the debut full-length features eight songs of prime time mid-tempo to faster material with emphasis on a pumping bass (a la Overkill), supplementary gang background vocals for key lyrical impact and a bevy of galloping/crunchy riffs and lead breaks that cause significant eargasms.

Standout moments occur often in the more controlled settings to contrast against the blitzkrieg speed action – such as the more progressive, tranquil opening for “Obedient Dogs” which then circles back to a killer melodic refrain during the instrumental portions, or the follow up mid-tempo swing/slam beginning riff to “Wired” that sounds like something you would have heard in the Frolic Through the Park – Death Angel days. At other times vocalist/ guitarist Vanias A. venomous screams take aural precedence, such as the heads down Bay Area oriented “Sacred Machine” where he channels his best Schmier/Mille crossover delivery. Having bassist Vasilis C. who can act as a third lead element at times opens up dynamic chord progressions and lots of musical interplay which makes closer “Addicted to Green” a shifting whirlwind for a four-minute closer as a lot of the circular riffs during the second half remind me of classic 80’s Metallica.

Those who desire speedy, tear your head off guitars and persistent double bass will devour “Shattered Sanity” as the band isn’t afraid to ramp things up song to song, pulling off killer stop/start transitions that should elicit proper crowd interaction. Amken for a younger band have taken more of an adventurous path in terms of songwriting, amply proving that variance can pay dividends in the long run for key hooks and overall memory retention. Prepare to hear a lot from Amken as Theater of the Absurd should be the tip of the creative iceberg for this Greek thrash unit.