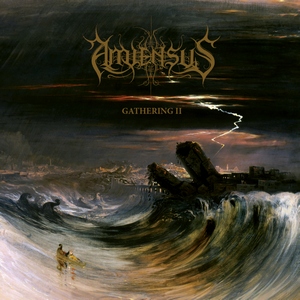 For the second time, Minnesota’s strongest black metal forces have combined to give us a sweet sampling of what they do best, with Gathering II. Both acts known for their ‘not so by the books’ approach to the genre, incorporating elements of prog, death, folk, and more into their approach, are great matches for one another (as Gathering I already proved). Gathering II simply ups the ante with not only a cut from each band, but with another one that includes members of both acts combining into a dominating force.

Oak Pantheon kicks things off first with their track, “A Demonstration.” Starting off with a bit of folky influence, the track builds itself up into heavier territory as it progresses. There’s a certain level of Opeth-isms into the mix in the way this build-up occurs, along with a bit of bluesy flair to the song, and the acoustic ending gives it a righteous conclusion that stands with some of their best works to date. Sandwiched in the middle is “Tanequil,” which contains members from both bands. A treat in and of itself for fans of either act, what’s most impressive is how it comes across as much more aggressive and modern in tone, while keeping the distinct elegance that both bands radiate separately. Concluding things is Amiensus’ “Now Enters Dusk,” which harkens back sonically towards their earlier material more so than the more assertive black metal of their most recent EP. Filled with some real spine-chilling melodies and driving atmosphere, it’s an easy track to sink several plays on repeat without a second thought.

An easy sell for those familiar with either act, it’s also a fine introduction for anyone who has not yet encountered them as of yet. Amiensus and Oak Pantheon are both some of the US scene’s best kept secrets, and Gathering II shows them at nothing less than the top of their game.