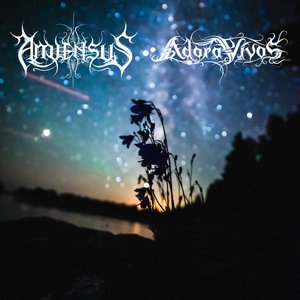 Amiensus has never shied away from shorter releases, and most importantly, they always seem to deliver a consistently high quality, even if it’s just for a song or two (check out their Gathering releases with Oak Pantheon). This time, they’ve joined forces with fellow Minnesota chums Adora Vivos for a three song split which continues to put the spotlight on two of the state’s strongest forces.

Adora Vivos has two tracks on the split, and it is fantastic to finally hear some new music from the band. 2013’s Toward the Empyrean was an excellent EP of doom/death metal, and opening track “Silence Awakened” picks things right up where they left off. It’s sprawling and epic in tone, and effectively moves between more driving, death-driven material and cinematic gloom and doom – all while capturing a magical and forest-y sense of wonder about it. The band’s second track, “Ex Cinere,” is a quieter affair, utilizing dreamy elements in both the use of vocals as well as the floaty guitar riff. The campfire vibe is strong here. That brings us up to Amiensus’ contribution in “Leaves Will Grow Anew.” A somber, 10-minute track is as epic as they can come from the band. It moves between faster and more blackened moments that are draped in instantly hooky melodies to rising moments of triumphant and softer, dreary moments of reflection. It’s always impressive to see how the band reinvents a part of itself with each release, while still keeping the Amiensus identity intact.

For $3 (all of which will be generously donated to the MN Freedom Fund), there’s no excuse not to check out the latest works from two of Minnesota’s strongest artists when it comes to atmospheric and woodsy material. Amiensus has a new release in the near future, and one can only hope that this release causes Adora Vivos to follow suit with one as well.