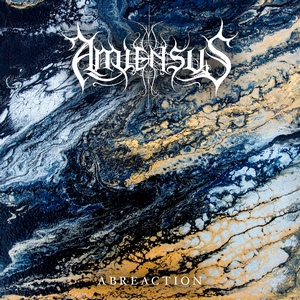 Amiensus have been an interesting band to watch as they have evolved since 2013’s riveting Restoration debut. What is of particular interest, is how they have managed to move into various directions, some less predictable than others, while still remaining true to their core sound. There was the still illustrious Ascension, which brought the band into more epic and grand territory, and a switch into more blackened territory with 2017’s All Paths Lead to Death. Given their more woodsy/folk origins, it’s always been somewhere nestled into their sound, and Abreaction again sees them taking that formula into different directions.

It’s been posted elsewhere that the band views Abreaction as gelling a bit of all of their ‘sounds’ together, and after absorbing it many times, it’s a fair statement. Abreaction takes you on a trip through a myriad of different things while still keeping a sense of purpose and focus. On the heavier end, “To the Edge of Life” has a strong melodic black metal tone to it, and a touch of gloom as it slithers between more riveting passages of speed and somber quiet. “All that is Unknown” has one of the more bottom-heavy vibes on the record, and the brutal feeling mixes nicely with some blackened melodies that have an almost ethereal quality to them. That dark momentum carries farther into the closer “Iconoclasm,” which weaves a stronger doomy atmosphere and a palpable sense of dread into the formula to end on a massive high note.

The band’s lighter (and folkier) side still commands just as much attention as it ever has. It begins in opener “Beneath the Waves” with gentle vocals and clean guitar before they move into a more melodeath/black climate, albeit still with some elegant qualities. “Divinity” is the real shining melodic moment to this scribe, dripping with melancholy and string accompaniment. The longing clean vocals from James Benson are a highlight, and the shifting between heavier and softer sections carries that folky and blackened vibe while elevating towards an ethereal climax later in the track. “A Convocation of Spirits” and “Cold Viscera” offer a little bit of both the darker and melodic sides in their own way too. The former embracing some ambient melancholy and woodsy elements with more urgent upticks in speed, while the latter flexes some melodeath-esque muscles in its riffing that makes for a powerful track ready to burst at one second but able to pause and provide reflection towards the middle of it.

Amiensus continue to be one of metal’s finest underground acts. Abreaction sits just as strongly as Restoration and Ascension before it, while providing yet another slightly different yet compelling take on the band’s sound in a way that’s both dark and beautiful. The appeal is wide with this one – everyone from black to death to folk should be able to find something to dig in and find a deep appreciation for.