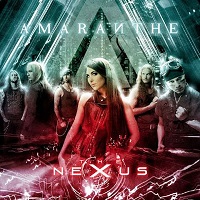 Denmark/Sweden’s Amaranthe aren’t too far removed from another Swedish band of similar characteristics, Sonic Syndicate. Sonic Syndicate, of course, were more known for their good-looking bass player (Karin Axelsson) than their songs, which were to be frank, pretty soulless and glossy. In slight contrast, Amaranthe plays the tri-vocalist card, with a manly dude handling screams, a regular clean singer, and frontwoman Elize Ryd, who is the point of focus on their sophomore The Nexus album.

Poppy, hyper-processed Euro melodic metal is the name of the game, so essentially, one is bombarded with lots of effects, bouncy keyboards, and crunchy guitars. This stuff is meant to be stickly-sweet, and you bet your (sweet) behind it is. A lot of this comes from Ryd, who has a peppy, harmless voice, which opens up all sorts of discussion since she was supposedly in the running for the Nightwish gig several years back. She’s definitely not as versatile as Anette Olzon, yet she makes some quality choices on “Invincible” and “Theory of Everything.”

The triple-vocal idea isn’t as groundbreaking as the band probably thinks (blame it on the overflow of bands doing good cop/bad cop), so The Nexus is left to fight off its overly commercial vibe. However, their songs are better than Sonic Syndicate’s, and Ryd, while not a difference maker, is about as ideal of a singer the band could employ for European metal that is short on substance, but long on sugar.