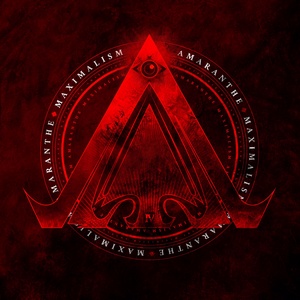 Amaranthe established themselves early on as a unique act within the metal world, with three vocalists and a sense of pop/electronic dynamics that blended into a modern melodic death metal swirl. Over the course of three full-lengths, they all but patented their approach to the genre – each time around growing bolder and more expansive, yet keeping the same overall feeling intact. Maximalism promised a shift in the dynamic, “maximizing” the band’s sound so to speak, and that’s exactly what the album delivers.

There are some stylistic changes to the Amaranthe sound, with the band opening up their approach while managing to maintain a sense of their established core. The most notable being that the usual, 3-way vocal sharing feels less formulaic, which allows the material to have a more natural flow. Each of the three vocalists get their time in the limelight, with some tracks driven more by one singer than trying to force parts for everyone. For example, Jake E absolutely soars on the mid-tempo and epic sounding “Break Down & Cry,” Henrik Wilhemsson drives one of the band’s heaviest songs to date in “Fury,” and Elize Ryd beautifully concludes the album with a solo performance on the ballad “Endlessly.”

With this more expansive dynamic, some pop hooks become more front-and-center than they have been in the past, which may be a point of contention for some, most visibly with the hard rock oriented “That Song,” complete with Queen-inspired stomping/clapping. “Limitless” cranks up the electronic components (and vocals), relegating the “metallic” edge to a background player (yet still an important piece no less). Lastly, “Boomerang” channels Dead or Alive’s “You Spin Me Round” with a heavier mentality and explosive energy – with a chorus guaranteed to bury itself within the listener’s mind for days at a time.

But for those who may feel the band have overstepped their bounds in branching out, the galloping “Faster,” groovy/mid-tempo “Fireball,” and bouncy “On the Rocks” should feel quite comfortable to long-time fans. As does the opener “Maximize,” which may be the most “Amaranthe-sounding” track the band has recorded and pushes all the usual qualities of the band up to 11. What keeps things held together through all the diversity is guitarist Olof Mörck’s knack for providing tasteful solos (see “That Song” or “21”) and subtlety effective riffs into the overarching format. The band’s songwriting holds together a diverse album and serves it up in compact, digestible pieces that you’ll want to hear again and again.

With their fourth album, Amaranthe needed a make-it-or-break-it release to show they could escape the confines of their sound, even if it one that they’ve pioneered from the start. Maximalism not only shows them capable of further developing their sound, but understanding how to do it in a way that should please longtime fans and welcome plenty of new followers to the fold. Those looking for big/fun pop hooks, urgent metallic riffs, elegant solos, and one of the broadest strokes of vocal diversity going – Amaranthe delivers it all with confidence and glee. No reason this shouldn’t be the proper US breakthrough they have been looking for, as well as one of the strongest albums of the year.