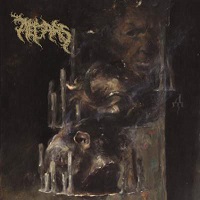 The success of Portal has given Australian death metal a new, more angular façade. Prior, the country had to run out the likes of Destroyer 666 and The Berzerker, two worthy bands, but nowhere near as daunting as Portal, or even their Impetuous Ritual baby band. So with that in mind comes relative newbs Altars, who prior to the release of their Paramnesia debut, logged a handful of quality splits and demos, whetting the horde’s appetite for death metal of the strange, lush, and warped kind.

There is an obvious Morbid Angel influence across the album’s eight numbers, one that can’t be hid very well. Some of these ideas (“Terse” most notably) draw comparisons to Blessed Are the Sick-era MA, where ‘ole Trey was imbuing his riffs with turbine and metaphysical qualities. In essence, they went beyond the scope of what then, was considered traditional. Altars are by no means traditional, save for the desolate spew of vocalist Cale Schmidt, so the wide lens of jams like “Husk” and especially the climb of “Solar Bridge” not only bring to mind MA, but their 90’s death metal contemporaries Gorguts as well.

The album wraps with the three-part “Paramnesia” opus, which is where Altars starts to take on alien riffs (see the halfway mark of “Descent (Paramnesia Part I)” as well as sound exploitation on the short “Gibbous (Paramnesia Part II).” This was all designed to crescendo with the third song in the trilogy, “Ouroboros,” which plants its feet via marching drum blasts and diving riffs that again, sort of move beyond the norm of how death metal is supposed to play out. It’s a fitting a capsule to an album that could be considered one of the sleeper picks for death metal debut of 2013.