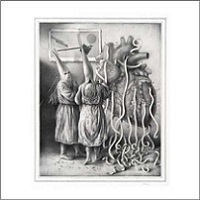 The new year is alive and well, bursting at the seams with a wealth of sludge/doom derived groups, coming to the fore in a variety of forms. For Norway’s ALTAAR, it’s the long and drawn out experimental kind of sludge that makes its presence heard and felt on this self-titled debut. Featuring two tracks spanning 35 minutes, each take their time to get going, though they’re each opposites in motion when it comes to execution.

Opener “Tidi Kjem Aldri Att” is the slower-burning of the two, an entirely instrumental and flowing leviathan of a work that bobs in intensity over the course of its 20-minute run-time. Open and alien at times and claustrophobic and toxic at others, there is nonetheless never a real particular climax or soaring melodious moment, just an ongoing sea of rising and falling until the curtain crashes in a super-long and quiet fade-out. Finisher “Dei Absolutte Krav Og Den Absolutte Nåde” is a more varied affair, picking up the quiet burnout of the previous track and letting it simmer a few minutes before the real fire comes to pass. Vocals enter the foray at this point and, in all truth, the effect isn’t too far removed from Cult of Luna in impact and execution. The vocals don’t last for long, however, and before you know it the soundscapes/noise indulgences return while the album bleeds out.

This is a peculiar one, honestly, as there is a lot of good stuff here tucked in between long stretches of not-so-good stuff. Soundscapes/noise are fantastic when used appropriately, but often times here it comes across more as padding than as an effective conveyer of feeling. The behemoth excursion of the first track, however, is worth the price of admission alone and it’ll be fantastic to see how these guys develop their sound over time. The initial hump with this kind of style is always the most difficult to get over and if an interesting listen results, a glorious future is likely.