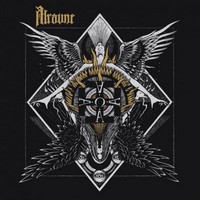 The joy of the debut when expectations are often muted and the potential for surprise is the highest it will ever be. Enter Tennessee’s own Alraune and their historically sound and cathartic take on black metal on The Process of Self-Immolation. It’s concise, it has an understanding of the genre’s past, present, and where it wants to go in the years ahead though there is ample identity here to separate it from the deluge of also-rans lining the shelves of the underground. In effectively only four tracks this nascent band do what bands twenty years their senior still fail to accomplish: achieving transcendence through fury.

Aside from the customary introductory track, the four remaining works are long-burners, each running between 8 and 11 minutes. Razor-wire tremolo runs and nigh-perpetual blastbeats set the tone and pace for each song, all beholden to a single theme explored a different way. “Exordium” is an exercise in panic, a life threatened and on the run from some inescapable reality, from the many ultra-tempo peaks that dot the song’s course till the sudden fadeout that brings it all to black. This song bears special attention because of how it uses the genre’s tropes, endless tremolos and blasting, to such visceral and at times even haunting effect. There are moments of pause and reflection, especially in the lingering connection between the album’s middle tracks, but otherwise the theme at hand is the unabashed pace of terror.

Mammoth closer “The Process of Self-Immolation” brings that terror full circle and the story to a close through complete disintegration. Unlike the stoic acceptance of immolation as duty in protest a la Thích Quảng Đức in 1968 (…you know the image whether you realize it or not), these are the sounds of someone going through the process and screaming unto oblivion every agonizing heartbeat of the way. Slow-burning gives way to perpetual motion and the many futile grasps of life attempting to hang on. Noise crowds in and just like that, it’s over and all lights are out.

Debut or no it’s difficult to find much at fault with The Process of Self-Immolation, its tightness in idea and execution far beyond its limited years. A hell of a win pickup for Profound Lore, if the band continues to improve with age there will be some gnarly results in the years ahead, so much as to dwarf this already colossal first step.