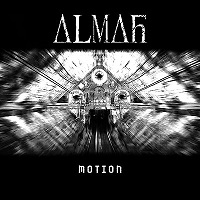 Funny to think that Edu Falaschi has been fronting Angra for over a decade now. Charged with rebuilding the band after the departure of Andra Matos in 1999 (not to mention the band’s rhythm section), Falaschi has made a nice little career for himself with Angra, and with his side band Almah, quality abounds. On Motion (the band’s third album) Falaschi and co. create a varied and memorable melodic metal album, one that skirts the bounds of power and modern metal nicely.

Falaschi is the rightful focal point here, and his pitch and caw are dead-on during some of the more muscular songs, such as “Days of the New” and “Zombie Dictator,” where Falaschi busts out into some rasps. Interesting to hear the man sing over material that is far less dainty than Angra, as it allows him to stretch his vocals into new territory, but his bread and butter is with melodic outings like the excellent “Bullets On the Altar” and “When and Why.”

As indicated above, Motion nips at the power metal spectrum of Angra, yet there’s a significant amount of hard-nosed riffs on display. Case in point, opener “Hypnotized” and album highlight “Trace of Trait,” both of which peel off sharp and jagged melodic portions that complement Falaschi’s vocal approach.

Most singers of notable metal bands go the full-on solo route, preferring to brandish their name wherever possible, which makes Almah even more refreshing. Make no bones about it – this is a veritable, totally worthy ensemble, and with Motion, Almah nips at the heels of Angra. Should Angra ever do a 180 and re-enlist Matos (which they’d be really dumb for doing), it should be of comfort for Falaschi that Almah is just as good as the band he helped rescue in 2001.