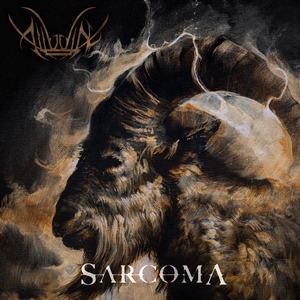 Making a big splash back in 2017 with their instrumental debut, The Deep Longing for Annihilation, Alluvial in 2021 has made a number of steps forward. The music is now backed by vocals courtesy of Kevin Muller (Suffocation live), and the band signed with Nuclear Blast Records. Sarcoma as their second album gives off a wave of death metal heaviness but layers it in with an atmospheric leaning that makes it shine all the brighter.

The way that Alluvial delicately balances instrumental prowess, bludgeoning heaviness, and dreamy melodies is what makes Sarcoma a striking listen. Opener “Ulysses” rolls things out slowly, morphing from an enticing melody to full-on death metal and switching off between powerful grooves, eerie atmospheric riffs, and a frenetic solo. “Thy Underling” takes things a bit further with the melodic end of the band’s nature, with some haunting clean vocals to trade off against the otherwise massive grooves of the track. Standout “40 Stories” sees the band at their murkiest, with airy melodies and clean-ish vocals offering a bit of a sludgy feeling, and the song never quite goes into a full-on assault – instead operating on a more emotive and controlled sound that acts as an excellent centerpiece. Elsewhere, the title track and “Exponent” provide monstrous and daunting riffs that all but streamroll anything in the band’s way. Towards the end of the record, the band returns to their instrumental side with “Sugar Paper,” a playful yet powerful track that provides dizzying musicianship with urgent riffs and some breathtaking melodies. It’s all of these different ways the band twists their sound that keeps things so fresh over the course of the album.

Sarcoma is an album of standout death metal. It keeps the aggression and heaviness at the forefront while still giving the listener a haunting atmosphere and dark melodies to bring them into their world. Alluvial positions themselves as one of the stronger acts within atmospheric death metal with this release.