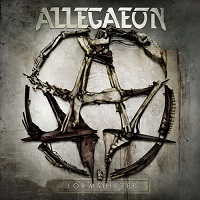 Boasting a hearty mix of technical death metal and classic melodic death metal, Colorado’s Allegaeon hit the ground running with an impressive debut in Fragments of Form and Function in 2010. Said disc was a very tight chunk of equal parts brutality, melody, and sheer songwriting prowess. Now two years later, we have their sophomore effort, titled Formshifter to follow up.

The result is an impressive one that sticks with what they do best, whereas also tightening up the songwriting even more. Allegaeon also doesn’t follow the Soilwork archetype of melodic death that is saturated with keyboards and soaring choruses – this really has that mid 90s melodic death sound to it, with gobs of detail and thought put into every note.

“Tartessos: The Hidden Xenocryst” is a track that is highlighted by some absolutely searing lead guitar work, with melody after melody flowing seemingly without effort. “A Path Disclosed” is a bit more on the aggressive side, especially with some brilliant drum gymnastics and some impact-laden riffs. “The Azarel Trigger” is one that brings the pace down slightly, and ends up being one of the heavier offerings on record, while “From the Stars Death Came” has a very thrashy feel throughout that makes it stand out nicely.

It’s certainly refreshing seeing a band contain many aspects of technical death metal – a sub genre that has gotten blatantly over saturated – and put a huge focus on intelligent songwriting. Smart and well-crafted songs are one of the most important aspects of Allegaeon that make them stand heads and shoulders above many of their peers. The attention to detail is admirable, and the band manages to keep each song interesting with a distinct flavor on each. This guy is sick to death of bands that play technically for the sake of it, but couldn’t write a song if it would save them from being run down by a bus. Allegaeon is thankfully the complete opposite of said fodder.

What we have here is a band that has some serious chops and knows how to write an album full of smart, detailed and absolutely enjoyable songs. This is essential for those who can’t get enough melodic death, technical death with a soul to it, and those who dig well-composed tunes that demand attention. The sky is the limit for this talented bunch – this guy is on board for the long haul.