All Will Know – Infinitas (Noizgate Records) 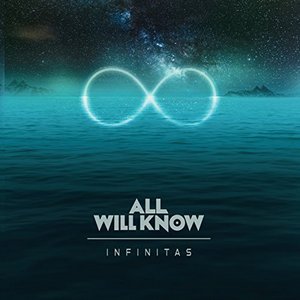 Despite doing plenty of digging, there’s always new bands to discover if you look hard enough. Case in point, Germany’s modern melodic death metal act All Will Know. Infinitas being their third release, it’s the first time this scribe (an avid melodeath connoisseur) happened to fall upon them. While it does tow the modern line, it generates quite a bit of excitement along the way.

Squaring up nicely with acts like The Unguided or In Flames, catchy material is the way of Infinitas. From a vocal standpoint, the album slightly favors the clean vocals over harsh ones, but after you hear cuts like “Age of Paranoia” or “Dead World” it’s easy to see why. With a pitch that’s more power/prog than poppy, they give the songs an added boost into epic territory. But they do contrast with more heavier moments, with darker groove coming out from time to time, such as “Ruins” or “Cold Realities.” With a near 60-minute runtime, these contrasts help keep the album feeling fresh, and the shifts into more epic chorus territory seems to work like a charm every time, in fact establishing a stronger presence with repeated listens. And the rest of the band isn’t overlooked either, with “Vicious Destiny” and “Behind Your Mask” going above and beyond to show they can craft as many instrumental hooks as they do vocal ones. So while some of the material may seem immediate, it’s not the type to fade away over time – the ultimate test of songwriting strength. Lastly, there’s an interesting unplugged version of “Deeper into Time,” which showcases a rather chill rendition of a track from their previous album, in a way that is more creative than you may imagine.

A lot for the melodeath fan to enjoy with Infinitas. Plenty of strong hooks, heavy grooves, and soaring vocal lines, but there’s never an emphasis of style over substance. An energetic and upbeat release that manages to improve the more you listen to it.