All That Remains – For We Are Many (Proshetic/Razor & Tie) 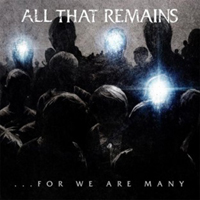 For this scribe, the first thing that comes to mind when thinking about All That Remains is the sight of Phil Labonte stage-diving during the band’s opening stint with Shadows Fall in 2004. Given how far ahead SF was to ATR at that point, yours truly probably uttered to himself, “There’s no way Labonte will ever catch up to his old band. Stage-diving while Shadows Fall is playing makes him look desperate.” Fast-forward six years later, with foot now firmly in mouth, it’s safe to say All That Remains are at the forefront of the American modern metal scene. For We Are Many is a reminder of that.

The band is still very much immersed in the melodic death metal-meets-quasi-metalcore sound first ushered in on 2002’s Behind Silence and Solitude, although Labonte’s vocals are at the forefront of every song. His clean vocals can get awfully sugary, specifically on “The Last Time” and the utterly cheesy ballad “The Waiting One.” On the flip-side, when the man wants to roar like on the title track and the brutal “Some of the People, All of the Time,” he proves himself to be ever the vocal-chameleon.

Beatdowns and typical metalcore thrusts are still the norm here, as brought forth during “Now Let Them Tremble” which will probably serve as the band’s concert opener for the foreseeable future. Same bodes for “Won’t Go Quietly,” which in spite of some silly lyrics from Labonte (“I’m not a man on a mission” – really?), emerges as one of the albums better tracks, with an excellent solo from would-be guitar hero Oli Herbert to boot. Far and away the best song here is lead single “Hold On,” which is auspiciously placed at the tail-end of the album. Song still rocks, though.

For We Are Many does little to split ATR’s sound in two. In fact, it’s a simple composite of the band’s last few albums, albeit toned down more to suit Labonte’s growing status as a dominant lead vocalist. Nevertheless, All That Remains has been chugging along, very quietly the last decade, but if now is truly the time for the band to be heard, there’s a lot worse albums to start with than For We Are Many.