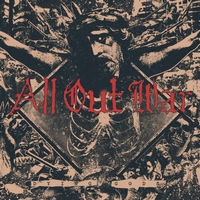 Metalcore has a tendency to leave a bad taste in mouth of many. But it wasn’t always that way. Before its huge push in the early 2000s, there were many bands slugging it out underground with a true hybrid of thrashy, riffy metal with the attitude and abrasion of hardcore. You know, real ‘metalcore.’ One such band was All Out War, who started their rampage back in 1997 and used breakneck thrash as the basis of their crossover with hardcore attitude and breakdowns.

All Out War has had some ups and downs throughout their career, but after the 1998 For Those Who Were Crucified line-up re-united back in 2013, the momentum kicked in to make this new EP, Dying Gods. The album has an older feel to it, which should please older fans of the band. Not to say it sounds dated, but the feeling does give Dying Gods a vibe that it could have came after the For Those Who Were Crucified release. After the short “Dying Gods,” “Vengeance Rising Eternal” cues the Slayer-esque thrash riffing with furious emotion and tosses some monstrous, groovy riffs to bring the track to a close. “Servants to the Obsolete” features some memorable chugging riffs at the beginning of the song before merging with some faster tempos. The album has a consistency to it that ensures not a second is wasted from start to finish.

Dying Gods takes us back to a time when metalcore wasn’t such a cringe-inducing word. Effectively blending hardcore with a venomous, metallic edge isn’t anyone’s game anymore. But All Out War still have what it takes to keep things fresh and interesting. All but certain to put a smile on any older fan’s face.