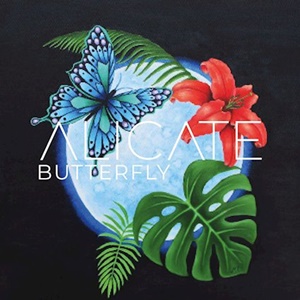 Originating from the southern part of Sweden, Alicate originally developed their work in the late 80’s, releasing a 7-inch single before dissolving. Reforming in 2006, they’ve since released three albums plus a live EP, extending themselves into outside songwriting credits for Giant, Skills and Sweet Oblivion (featuring Geoff Tate) while riding out the pandemic in the case of vocalist/guitarist Jonas Erixon. Butterfly is the fourth studio record for the quartet, their first in four years that carries this scribe back to his youthful days of melodic hard rock completely with catchy chord progressions, sterling choruses, and this energetic feeling that lifts spirits anywhere you go.

The AOR-ish nature to Jonas vocal range dominates the appeal factor right out of the gate. His ability to position those catchy chorus moments with multi-part harmony support and thoughtful bluesy smoothness makes me think of Lou Gramm (ex-Foreigner) meets Dann Huff (ex-Giant) in the calmer “My Last Goodbye” just as easily as the rhythmically charged, power guitar-oriented “Rise Once Again”. Acoustic guitar strains sit side by side against bluesy licks and subtle keyboard parts for “Monday”, the lead work displaying some classical, hero flair to make this quite a memorable, early Europe meets classic Whitesnake outing. At times the happier complimentary vocal/music aspects reflect a love of Sunset Strip late 80’s material, “Let It Out” one of those songs that place the right singalong chorus, playful bridge, and pocket groove rhythm section work to allow keyboardist Glenn Ljungkvist and Jonas to trade off licks/tricks in the instrumental passages. The record ends on an interesting working man’s anthem with “Done for the Weekend” – the playful, laidback bass line, Brian Howe-period Bad Company style musical atmosphere allows the gang-driven chorus / handclaps to become another signature Alicate song sure to swing the crowd live.

More for the late 80’s AOR/melodic hard rock crew, Butterfly proves that this style of radio-friendly music may not be blazing from commercial radio as much today as it did decades previous – but it doesn’t mean that quality musicians aren’t willing to create and execute strong, original material in the current musical landscape.