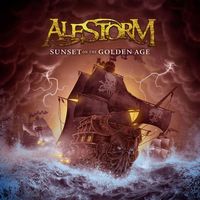 Three years out to sea after the release of Back Through Time, the Scottish pirates of Alestorm have once again returned to drink and plunder. Maintaining their often downright silly seafaring adventures, Sunset on the Golden Age again sees the band managing their balancing act of fun sing-a-longs with some serious musicianship to back it up. In fact, it may be their strongest batch of songs so far, so lets crack open that treasure chest and see what’s inside.

Truthfully, it seems Alestorm have upped the ante on their fun antics but have matched it with some strong instrumentation and diversity. Where else could you find a seafaring epic like “1741 (The Battle of Cartagena),” opening up with an 8-bit intro and leading into a grandiose tale so charismatic that you’ll want to find the nearest boat to shout out the chorus? Then you have the all-out thrashing assault of “Wooden Leg” and “Mead From Hell” alongside the more traditional ‘sure to be fun’ live tracks like “Drink” and “Walk the Plank.” There’s even a peculiar cover of “Hangover” (by Taio Cruz) that even features some (gulp) rapping, but the band does really make it their own. The care at which the pirate-themed power metal is merged with folk and thrash is worthy of note. Even the most absurd sounding songs on the album, such as “Surf Squid Warfare” (citing some references to their last album), delicately weave in addictive melodies that you can’t help but enjoy.

Still a band that you’ll either love or hate, Sunset on the Golden Age doesn’t change the status quo so much as delightfully refine it and sees the band playing to their strengths. Like their equally fun loving pals Trollfest, there’s a reason why Alestorm has resonated far beyond when the naysayers thought the gig would be up. Some say there’s no place for fun in heavy metal, but maybe they just haven’t heard Alestorm.