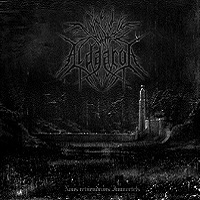 The French black metal scene strikes paydirt once again, this time in the form of Aldaaron. Hovering around the multi-faceted, yet attack prone brand of BM that the likes of Deathspell Omega, Blut Aus Nord, and Antaeaus have championed, Aldaaron makes the scene even more appealing on their debut effort, Nous Reviendrons Immortels.

Like the above-mentioned acts, Aldaaron use a deluge of smoldering riffs to make their case, oftentimes bringing in doses of speed (blasts-a-plenty) and the occasional nod to atmosphere. This is none more successful than on “Nirneath Arnoedia Partie 2,” a number that traverse down familiar, yet engaging BM avenues, but is cleansed by a gentle clean

Compositionally, Aldaaron waste little time in stretching the field, opting for a diverse spread of riffs ranging from large, expansive chord choices (see “Seigneur de L’Hiver”) to morose melodies (“Royaume”). In most cases, such a stance in BM forces the songs to suffer a quick death, but Aldaaron keep things interesting throughout this eight song

About as strong as a debut as one will find coming out of France, Nous Reviendrons Immortels is a striking reminder as to how formidable the French black metal has become. The scene has tons of potential and promise, and as long as Deathspell Omega and friends keep their heads out of Scandinavian waters, things could only get better. Get this.