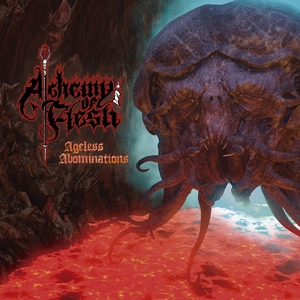 One man’s worshiping of the Floridian metal scene (read: Morbid Angel) comes to fruition with Ageless Abominations. Alchemy of Flesh is composed solely of the vision of Tim Rowland, and his attention to detail is what makes this feel stunning instead of played out. Those who tend to the altar of Morbid Angel, Hate Eternal, and other such acts are really going to dig this.

There’s a lot of detail that has been given by Rowland in making this sound as Floridian as possible. He goes so far as to use some of the same equipment as Trey Azagthoth. So obviously, there are obviously a ton of Morbid Angel-isms to be heard, but it never comes off as a rip-off or feels second rate. Other classic acts can find their way into the band’s sound in more subtle ways, and it does keep it from sounding like a Morbid Angel cover band. The songs themselves are full-tilt death metal, and the riffing energy is what really brings it all home. Each track, rooted in the old school scene, does its best to provide a solid coating of riffs that are vicious but also very memorable (check out the impressive “Lava Storm”). The knack for groove (“Lobsel Vith” or “Knotters of Entrails”) gives it a great rumble as well as that towering, wall-of-sound feel that they are striving for.

Rowland really seems to grasp the idea of how to play towards a band’s sound without having it come off as a knock-off or lesser version. Those who want some aggressive old school death metal that eschews the SweDeath trends would be wise to lend their ears to this one asap. Particularly those who still yearn for more material of Floridian quality.