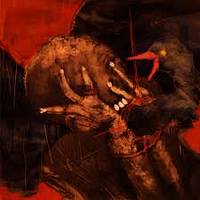 Boasting a clear and present Type O Negative influence in the vocal department, the German duo that is Albez Duz (that is “swan rush” in German) present an odd mix of 90’s Goth and Sabbath-influenced doom. The depression and/or sorrowful moods isn’t quite there, yet the darkness and affixation with a bygone era (read: mid-90’s transitory death metal into Goth) makes The Coming of Mictlan an oddball of a release. It’s like, where is the halfway point between Bloody Kisses and Turn Loose the Swans? The Coming of Mictlan is probably the answer. (Minus the violins, of course.)

The bulk of the album’s success should be credit to vocalist Alfonso Brito Lopez. Possessing the same octave capability as Peter Steele, along with a similar deep-throated, deep throat, Lopez ends up having more personality that a lot of his doom contemporaries. Granted, the Steele influence might be too far leaning one way for a certain segment of folks, but in the context of the all-gloom “Fire Wings,” or “Feathered Snake,” Lopez has that sort of wry conviction and Goth harmoniousness to give Albez Duz an identity.

The appetite for more distinct and imaginative guitars isn’t here, unfortunately. A lot of these riffs (courtesy of multi-instrumentalist Impurus) simply don’t take off; they plod with average chord ideas and don’t have enough around them to make an impact. It’s probably the biggest detriment to The Coming of Mictlan. So whereas familiar faces ala classic Tiamat or back-on-track Moonspell often had the sense to bring out the most in the riff department and pair them with keyboards and the like, Albez Duz allows for things to stay too dry and for too long. It’s not surprising that the closing number, “Twist in My Sobriety,” a Tanita Tikaram cover, has the most atmospheric allure and curdling melodies. Strange how these things unfold.