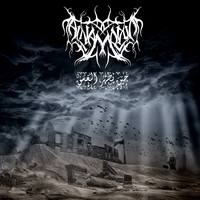 [9/10] When a band faces a potential death penalty for playing the music they play, it’s bound to be something great and worth the risk. Black metal like this is totally worth the risk. No joke, if these Arabian occultists were caught committing the crime of Black Metal in their home country they’d be charged with apostasy and sentenced to death. That’s true black-hearted black metal worship.

This is what’s going down in the Middle East. Saudi Arabia’s Al-Namrood (“the non-believers”) are fed up with religion and all its control and they’re letting loose detrimental insurgency. Saudi Arabian black metal is even more fantastic than it sounds. Who says you need a typical guitar/bass/drum lineup to play metal? Perpetually heavy as hell doom metal at that. They do use guitars, bass and drums, but the key to creating this epic density is the use of Middle Eastern instruments with minimal guitar/bass and tons of blazingly harsh vocals.

Heen Yadhar Al Ghasq is incredibly exotic yet still more brutal than most of today’s weak heavy metal. If there’s some kind of holy instrument that’s only supposed to be used traditionally, Al-Namrood probably used it in one of these wildly unorthodox songs. “Estahalat Al Harb” is an instrumental intro piece like you’ve never heard with a brutal flute solo. That’s right, a brutal flute solo. You can charm a snake with songs such as “Youm Yukram Aljaban” and “Subat.” And who would’ve thought there’d be a song that makes for a sexy belly dance as easily as it could trigger a bone-crushing mosh pit? That’d be “Bat Al Tha ar nar Muheja.” Belly-moshing could be the next big thing to do at shows, no? Only with Al-Namrood.

The vital-to-hear extraordinary exotic and epically outlandish metal album of the year is right here. Last year it was Rotting Christ’s Κατά τον δαίμονα εαυτού and Cult of Fire’s Ascetic Meditation of Death that bended the rules of culture and tradition, this year it’s Al-Namrood’s Heen Yadhar Al Ghasq. Add it to your collection, you won’t be disappointed, it’s far beyond interesting. It’s a dirty addiction.