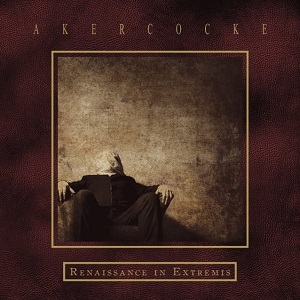 Akercocke is on the comeback trail, which makes us ponder their ballyhooed early 00s period. Largely championed by leading metal rag Terrorizer as one of the most exciting bands to emerge from the U.K., Akercocke rode the avant-garde brutal death metal action found on their Rape of the Bastard Nazarene debut and sophomore Goat of Mendes into prominence. Coupled with their stately, demure appearance (read: well-dressed men in suits) and Akercocke symbolized extreme metal erudition. So after a five-year hiatus (one that included spin-off band Voices), Akercocke return with the savage Renaissance in Extremis.

The core of the band remains vocalist/guitarist Jason Mendonça and drummer David Gray, who are joined by original guitarist Paul Scanlan and new bassist Nathaneal Underwood. Thus, the familiar hallmarks of Akercocke’s sound (thrash motifs spun as death metal shards, weary atmospheres and the occasional clean Gothic vocal passage) have shown no signs of deterioration. You’d be a darned fool not to be bulldozed by the opening run of “Disappear” into the nimble thrash-threaded “Unbound by Sin.” While these cuts convey convention, it’s the adventurous spoils of “First to Leave the Funeral” (can’t believe Cradle of Filth hasn’t used that title!) or the heaving “A Particularly Cold September” that encapsulate Renaissance in Extremis’s rather expansive display of intelligent, eerie extreme metal. Moreover, there’s this delicate balance struck between the band’s brutal forays that were so prominent circa 2001 and their subsequent Earache years, showing the Brits remain almost an can-do-it-all extreme metal band.

In what should be one of the most resoundingly-approved reunions of late, Akercocke appear to not have lost a step, but rather gained a couple during their time off. And it’s like this: When assembly line and cookie-cutter death and black metal get too boggy, just reach for a higher level of sophistication. That would be Akercocke and Renaissance in Extremis.