Airlines of Terror – Terror from the Air (Goressimo Records) 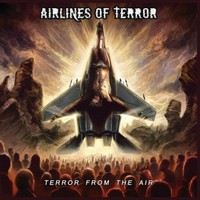 Often, people tend to downplay bands that identify themselves with a particular topic/theme in mind. It’s an easy target to say that they have limited themselves. It’s also a bit hypocritical when considering all of the death/zombie/murder clichés within death metal, but it happens. Italy’s Airlines of Terror, if you can’t tell from the band name and album title (their second full-length by the way), there is a bit of a ‘plane theme’ here at play. So if you are one of those types, please do yourself a favor: read on and check these guys out regardless.

Airlines of Terror play a thrashy version of death metal that relies on strong grooves, ripping solos, and catchy melodies within an onslaught of death metal heaviness. There’s never a break in the pace or a moment to catch your breath but you’ll still remember the journey afterwards. One of the early favorites is that of “Funeral Rites Made to Exceed the Speed of Sound” (what a great title too), which sneaks in a few clean vocals in between thrashing, high-intensity riffs. It also carries the weight of good ole straight-forward death metal such as Hail of Bullets, the frantic thrash of Revocation (“Suiced And Bombardment”), as well as some gnarly groove that will get everyone moving (“The Sound of Hardcore Diplomacy”). There’s a bit of twisted humor as well, with some of the titles including “Engines Behind the Lunar God Volcano” and “Red Wings Kaput (Swing Swing Kaput).”

All of this combines for a downright fun death metal mission through the sky. The dual sense of melody and sheer aggression merge in a way that feels genuine, and the airplane theme gives a different spin on the usual death metal tropes. Expect to be hearing more about these guys in the very near future as this seems bound to, uh, take flight.